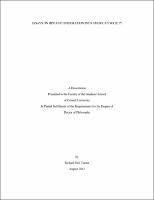 Due to rapid expansion in size of the Hispanic American population, Latinos are exerting an ever growing influence on the economy and culture of the United States. At the same time, their own views and lifestyles are being reshaped by exposure to the rest of American society. Hispanics' patterns of adjustment to and interaction with the surrounding environment are sure to have important implications for the group's long-term socioeconomic attainment as well as for general societal well-being. In light of the salience of the issues involved, this dissertation explores indepth a few specific facets of the process of Hispanic incorporation into American society. Chapter 1 focuses on how compositional factors (e.g. women's economic resources, mate availability) affect the marriage rates of Mexican Americans and Puerto Ricans relative to those of non-Hispanic whites and blacks. Chapter 2 examines whether the migration of Latino workers to rural areas with burgeoning Hispanic populations impinges on the economic outcomes of established residents. Chapter 3 investigates patterns of occupational segregation by ethnicity in the rural South to gauge labor market competition between Latino migrants and the region's longer-settled groups. The three studies yield several noteworthy findings. Chapter 1 documents that Mexican American and white women marry at rates well above those of Puerto Rican and, especially, African American women. In addition, the results suggest that Latinas' limited economic resources reduce their likelihood of marrying vis-à-vis whites and blacks, while their larger supply of stably employed men and higher probability of being foreign-born raise their comparative marriage odds. Chapter 2 provides evidence that growth in the Latino share of the workforce in new rural destinations leads to somewhat less desirable income and poverty trajectories for non-Hispanics. Chapter 3 shows that Hispanics in the rural South experience a large degree of occupational segregation from whites and African Americans and rank below both of these groups in occupational status on average. Furthermore, low levels of English proficiency, US citizenship, and educational attainment largely account for the disadvantaged labor market position of Hispanic workers.