Poetics Of Difficulty In Postmodern Poetry 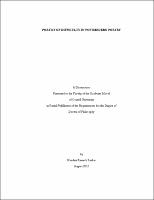 This dissertation explores aspects of difficulty in the work of post-1945 British and American poets. While no unified theory of difficulty is attempted, difficulty is interpreted as part of the poem's ethical and intellectual commitment towards the sociohistorical matrix that harbors it. Chapter 1 undertakes a general overview of the aesthetic and social issues involved in the practice of poetic difficulty. In chapter 2, I examine the work of the American poet John Ashbery. Through readings of The Tennis Court Oath, "The Skaters," and "Self-Portrait in a Convex Mirror," I argue that Ashbery's poetry is uncertain about the ethicality of difficulty, and as a result the difficulty of his poetry performs complex involutions and self-defeating maneuvers in which irony becomes both indispensable and insufficient. In chapter 3, I discuss both the early and late poetry of J.H. Prynne with a special emphasis on the reader's complex relationship with a lateModernist text that demands tremendous amounts of labor. I argue that this relationship can be understood in terms of a version of love that is shaped both by Prynne's explicit theoretical positions and by the reader's own perceptions of loyalty and reward. Chapter 4 takes up the possibility that difficulty in poetry is an outcome of the poet's sense that language is complicit in, and is the prime instrument of, collective acts of violence. I look at J.H. Prynne's "Refuse Collection," which was written in response to the torture in Abu Ghraib prison. I complement this stance towards complicity with a reading of Peter Riley's poetry, which questions the inevitability of complicity and difficulty. In the fifth and final chapter, I take up the possibility advanced by both British and American poets as well as twentieth-century philosophers that poetry is a privileged site of thinking, and that difficulty is an effect and instrument of such thought. I conclude that poetic difficulty might indeed point to a radically different mode of employing and responding to human creativity.