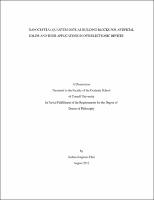 Nanocrystal quantum dots exhibit size-dependent optoelectronic properties and provide intriguing scientific and technological opportunities. Most proposed technologies based nanocrystals depend on macroscopic functional assemblies of nanocrystals in which the nanocrystals interact with each other to give rise to new collective properties - also called as artificial solids. As in the analogous atomic crystals, the optoelectronic properties of artificial solids are governed by (1) the energy levels of nanocrystals, (2) electronic coupling between nanocrystals, and (3) the symmetry of the nanocrystal superlattice. These issues add many levels of complexity to the design of artificial solids and, for the successful development of nanocrystal based technologies, it is crucial to gain deep understanding on the structure-property relationship of nanocrystals on multiple length scales. In this dissertation, I will present studies that show insights into the three governing factors of the optoelectronic properties of artificial solids mentioned above. (1) Nanocrystal energy levels: a direct correlation between interfacial energy level offsets between lead chalcogenide nanocrystals and ZnO layers with photovoltaic device performance is presented. Based on obtained insights on the size dependent photovoltaic properties of lead chalcogenide nanocrystals, first demonstration of solution processed nanocrystal tandem solar cells was achieved. (2) Inter-nanocrystal electronic coupling: rates of photogenerated exciton dissociation in nanocrystal assemblies as a function of inter-nanocrystal spacing are probed. The results show that excitons dissociate via tunneling induced delocalization among neighboring nanocrystals. Based on insights obtained from this work, drastically improved performance of solution processed nanocrystal infrared light emitting diodes is demonstrated. (3) Nanocrystal superlattice symmetry: interaction between ligand molecules on the surface of nanocrystals play critical roles in self-assembly process. Differences in the coverage of surface ligands bound to nanocrystals can be exploited to tune the shape of nanocrystal interaction potential during the self-assembly. Denser ligand coverage causes nanocrystals to interact as spheres and face-centered cubic structure is formed. In contrast, sparse ligand coverage amplifies the aspherical shape of the core crystallite and can cause non-close packed structures such as body-centered cubic.