Graphs Of Free Groups And Their Measure Equivalence. 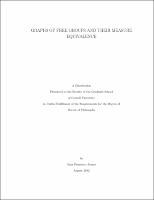 This work concerns the Geometric Group Theory of an interesting class of groups that can be obtained as graphs of free groups. These groups are called Quadratic Baumslag-Solitar groups, and are defined by graphs of groups that have infinite cyclic edge groups, and whose vertex groups are either infinite cyclic, or surface groups [pi]1 (S ) that are "attached by their boundary", meaning that the edge groups of the adjacent edges correspond to the subgroups generated by the boundary classes of S . More generally, we may also take S to be a 2-orbifold. The first part of the thesis studies JSJ decompositions for groups. We prove that, in most cases, the defining graph of groups of a Quadratic Baumslag-Solitar group is a JSJ decomposition in the sense of Rips and Sela [36]. This generalizes a result by Forester [11]. The second part studies measure equivalence between groups. It involves the concept of measure free factors of a group, which is a generalization of that of free factors, in a measure theoretic context. We find new families of cyclic measure free factors of free groups and some virtually free groups, following a question by D. Gaboriau [16]. Then we characterize the Quadratic Baumslag-Solitar groups that are measure equivalent to a free group, according to their defining graphs of groups.