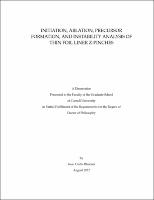 This dissertation presents the results of mostly experimental work studying the early-time behavior of thin foil liners as compared to wire-array Z-pinches. It involves three studies, covering initiation, ablation and precursor formation, and instability analysis. Initiation was studied by observing the optical emission of various thickness (0.6-23.5 [MICRO SIGN]m Cu) liners using a streak camera. It was found that thinner liners initiated sooner, more quickly, and more uniformly than thicker liners. This correlated well with both an increase in instantaneous dJ/dt at the time of first emission as well as the inductive voltage at the time of first emission. The threshold for uniform initiation was dJ/dt>3.5x1016 Acm[-]2 s[-]1 . Uniform initiation is important for liners because nonuniformities could lead to enhanced instabilities and poor liner performance (compression, x-ray production, etc.). Ablation and precursor formation of wire-arrays (16x75 [MICRO SIGN]m Cu) and liners (6 [MICRO SIGN]m Cu) were studied using r-[theta] density maps and radial mass profiles created by an axial X pinch radiography diagnostic. These images show very strong differences in this stage of the Z-pinch. Wire-arrays develop complex, azimuthally varying ablation structures that lead to dense precursors. Liners, however, show significantly reduced and azimuthally uniform ablation leading to an order of magnitude less dense precursor on axis. This is likely due to the discrete versus continuous nature of wire-arrays versus liners. With wire-arrays, plasma that is created on the outside of the wires can reach the array axis by being swept through the gaps between the stationary wire cores. In contrast, liners have no "gaps" for plasma to flow through. Therefore, any plasma that is created on the outside of the liner is trapped there until the bulk of the liner moves with the implosion. Consequently, only the plasma that is created on the inside of the liner is able to contribute to precursor formation. This is an important result because reduced precursor formation is important for fuel compression and heating in MagLIF. Less precursor can also lead to enhanced x-ray production because there is less mass on axis to cushion the conversion of kinetic energy into x-rays during the implosion and stagnation phases. Finally, in the instability studies, it was observed in laser shadowgraph images that liners develop a much larger amplitude instability on their outside surface as compared to wire-arrays. This is an important discovery and could be detrimental to liner performance (compression, x-ray production, etc.) because it could lead to enhanced magnetic Rayleigh-Taylor (MRT) instability during the implosion phase. The reason for the larger instability in liners is again probably due to the fact that plasma builds up on the outside of the liners with no where to go. A possible source of the enhanced instability was found using 2D (xy) PERSEUS simulations comparing the results of MHD and Hall MHD simulations. The instability only developed in the Hall MHD case. The 2D nature of the simulation, along with all simulation parameters being equal between the two cases, rules out the possibility of MRT or m=0 for the cause of the instability (in the simulation). It was found that the Hall term was responsible for causing a shear-flow instability that developed later in time to resemble the experimental results.