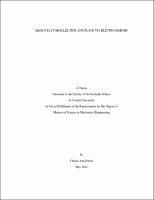 The quest to move small objects quickly, efficiently, safely, and effectively has been a goal of robotics and manufacturing since the beginning of mass production and the decreasing size o f components of technological interest (i.e. electronic components and other similar materials). While there is a lot of diversit y in the mechanism of transport, such as the number of degrees of freedom in a robotic arm as well as the type and number of end efforts handling the object, there is still a lack of consistency, accuracy, and delicacy in moving millimeter, micro - and nano-scale objects. This paper explores the use of electroosmosis to transport mm-sized spheres which are used to assembly large scale objects. In contrast to previous works, [1, 2], which focused on using arrays of bridges to grab a single substrate, we demonstrate individually controlling each element in the array to pick up objects from positions of our choosing. The advantage of this water droplet method is that it allows for delicacy in transport due to the lack of mechanical grabbing mechanisms. What makes this device particularly unique is the ability to individually address each droplet channel to control the droplet growth. The droplet size can be predicted, and the emerging droplets and surface tension to pick up objects can be controlled prior to any motion. Furthermore, this device has the capability to be expanded for massively parallel (on the scale of millions) assembl y.