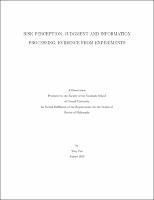 This thesis investigates the role of cognition in the broader field of agricultural and food economics. Three studies in the thesis each targets on one aspect of human behavior. Study 1 deals with non-standard belief. Using overconfidence and self-attribution, study 1 investigates how consumers react to temporary quality failure and perceive food safety risk depending on previous consumption experience. Results showed that people decrease the consumption when facing ambiguous signals regarding the food quality, but would not cease to eat altogether. Due to a taste of consistency, participants updated their risk perceptions and judgments based on their eating behaviors. Though experienced consumers picked up signals faster, their judgment was not better than those non-users due to a much stronger psychological bias. Study 2 deals with non-standard decision-making. Using psychological terms such as cognitive dissonance and confirmation bias, study 2 reveals how individual consumers inadequately process information, pay limited attention to signals, and make decisions bias towards their initial choices. Results suggested that consumer's judgment and information processing depend a lot on their initial beliefs or consumption status. They used higher bidding prices to justify previous behaviors and selectively paid attention to information in favor of their initial choices. In terms of market responses, due to psychological biases among consumers, demand curves were less possible to shift down under food safety risk. Study 3 deals with non-standard preference and its market responses. Results showed that asymmetric adverse incentive structure made a risk-averse loan officer inclined to reject loans to avoid risk of penalty. It provides micro explanations for macro level credit rationing phenomenon in the financial market. Lenders' reference-dependent utility under asymmetric adverse incentive structure broadens literature on institutional mechanism design to a behavioral scope.