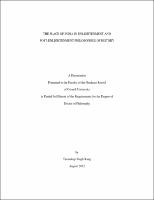 Within Enlightenment and post-Enlightenment philosophies of history, the Orient was represented not only as occupying a different geographical space from the Occident, but as participating in a different historical moment. Even as the Orient functioned as a site of curiosities, a subject of fantasy, and an object of domination, it was also a source of comparison that played a defining role in Europe's own self-definition and sense of history, including what was often a sense of world-historical mission. This dissertation explores the ways in which an intensifying interest in India, particularly ancient India, shaped European thinkers' historical understanding and their theories of world history. The notion that India was a nation of great antiquity was not an invention of either the Enlightenment or Romanticism; however, the age of India and its supposed role as a land of origins acquired new significance during the Enlightenment with the advent of elaborate attempts to reconstruct the trajectory and logic of world history. Through a focus on the place of India in the writings of Voltaire, J.G. Herder, Friedrich Schlegel, G.W.F. Hegel, and Arthur Schopenhauer, this study shows how some of the defining characteristics of modern historical thought were integrally related to Europe's encounter with the Orient. The debate over Indian origins also reveals how the status of the Orient was bound to the problem of defining history itself. In deciding where and when history began, and in determining which cultures belonged inside and outside of it, philosophers of history were determining both the contours of the concept and the proper method of historical interpretation. The result was instrumental for the rise of modern historical thought.