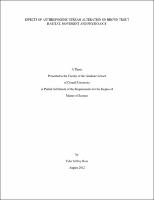 Anthropogenic stream alterations are caused by various factors, such as dams and water diversions that often change the flow, temperature and turbidity regimes of the aquatic ecosystems they occur in. Altered, unfavorable stream conditions are known to affect fishes at multiple levels of biological organization. These effects range from primary (e.g., blood cortisol concentrations) to secondary (e.g., serum chemistry) to tertiary levels (e.g., growth and condition) and can be manifested at any and all biological levels. Knowledge of fish responses to altered stream conditions at these levels of organization provides insight into population-level effects of anthropogenic alterations on brown trout Salmo trutta, which can be used to inform management decisions and mitigation actions. The response of brown trout to altered temperature, turbidity and flow regimes in upper Esopus Creek, New York were evaluated at multiple biological levels during summers 2010 and 2011. Secondary and tertiary-level effects were compared between trout in a stream segment receiving cold, turbid water releases from an aqueduct originating in a nearby reservoir and trout in a stream segment above the confluence of the aqueduct (i.e., unaffected by releases from the aqueduct). A fish health assessment was conducted to evaluate secondary and tertiary-level responses in summer 2010, and radio-telemetry, capture-recapture and intensive habitat surveys were used to evaluate additional tertiary-level responses in summer 2011. Results from summers 2010 and 2011 indicated that trout in all reaches of upper Esopus Creek were stressed at the secondary (i.e., serum chemistry) and tertiary-level (i.e., body condition, growth rates and movement rates), and that trout immediately downstream from the aqueduct were less stressed. In addition, summer 2011 habitat data indicated that greater amounts of habitat that was optimal for adult trout existed downstream from the aqueduct, and adults preferred these types of habitats. Stream conditions upstream from the aqueduct were warm and low-flow (i.e., stressful for trout), and the water was clear and not turbid during both summers. Conversely stream conditions immediately downstream from the aqueduct were turbid (i.e., stressful for trout), fastflowing and cold. Therefore, stream conditions throughout upper Esopus Creek during both summers were stressful for trout to some extent, and this was reflected in serum chemistry, body condition, movement and growth. Stream temperature is a dominant factor affecting fish growth and performance, which may explain why trout immediately downstream from the aqueduct were less stressed. Results from the present study have local and broad implications. They could be used locally to inform future management decisions of the water and fishery resources of upper Esopus Creek, as well as to educate the various stakeholder groups of the stream and its resources. They could be used broadly to inform management decisions and mitigation actions to benefit fishery resources in other aquatic ecosystems affected by humans (e.g., tailwater trout fisheries).