Performing Workfare: An Ethnography Of The So-Called One-Euro-Jobs 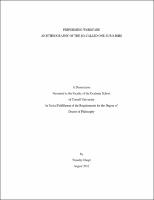 Anthropological considerations of welfare reform, in their most compelling moments, mobilize ethnographic evidence to undermine the hegemony of a neoliberal project, which orients the logic of public services toward the market if it doesn't privatize these services outright. While my dissertation draws on and engages these studies, my fieldwork on a new workfare program in Germany required me to pursue a very different line of inquiry. Interviews with persons encompassing a range of perspectives (workfare participants, NGO administrators, social workers, Job Center case workers, and Job Center administrators) quickly proved that it wasn't the neoliberal rhetoric of the reformers that had become hegemonic but the politicoeconomic rhetoric of their critics. In order to come to terms with the significance of this, I (1) readdress the theoretical effect of ideology via a discussion of Weber, Freud, and Lacan, whereby I argue that "spirit" can, in psychoanalytic terms, be understood as socially produced desire; (2) show how the legal and institutional framework of Germany's workfare state supports a rational-strategic relation to work but not a spirited one; (3) show how the political rhetoric of reform demoralizes the middle class just as their critical reaction ultimately dispirits those participating in the workfare programs; and (4) discuss the relevance of German MCs for the cultural framework surrounding welfare and its reform in that some refer to themselves as losers or deadbeats in lyrics that structurally resemble American gangsta rap.