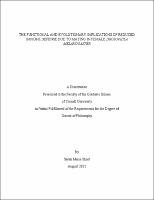 Trade-offs between immune defense and life-history traits have the potential to dramatically alter the function and evolution of both traits involved. Female Drosophila melanogaster show reduced immune defense after mating, suggesting a potential trade-off between mating or consequent reproduction and immune defense. In this work, I demonstrated that post-mating systemic immunosuppression varies in degree across different bacterial pathogens. I also showed that the effect of mating on immune defense is genetically variable in degree among female flies, but that males are not significantly genetically variable for the degree of post-mating systemic immunosuppression they elicit in their mates. My data revealed that the variation in females is likely due to recessive deleterious alleles and did not reveal evidence for an evolutionary trade-off. I determined that reduced immune defense after mating is dependent on seminal fluid transfer and on the presence of a female germline. Consistent with this result, I identified a family of genes involved in formation of the vitelline membrane that are more reduced in expression after infection in virgin females than in mated females. These results together are consistent with a model in which virgin females reduce reproductive effort to favor immune defense, an action that may not be adaptive or physiologically possible for mated females. I identified many immune genes that are differentially altered by infection in virgin versus mated females. These included a family of antimicrobial peptide genes, genes in the Turandot family, and TepII, all of which have more strongly increased expression in virgin than in mated females in response to infection. In a separate experiment, I found that when females are infected with bacteria, virgins have higher antimicrobial peptide transcript levels at early time points in the infection. It is possible, then, that mating alters females' capacity for systemic immune defense by directly or indirectly reducing their immune system activity.