Quantification Of 3-Isobutyl-2-Hydroxyprazine, A Key Intermediate In Ibmp Metabolism 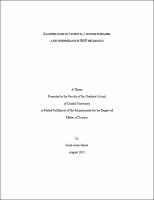 3-isobutyl-2-hydroxypyrazine (IBHP) is thought to be a key intermediate in both the biosynthesis and degradation of the herbaceous smelling 3-isobutyl-2-methoxypyrazine (IBMP), but quantitative methods for IBHP analysis are not widely reported and its behavior over the growing season is not well understood. A recent hypothesis suggested that IBHP and IBMP concentrations over the growing season were correlated, leading to the ability to estimate preveraison IBMP from harvest IBHP samples. An improved method for quantification of IBHP was developed, using a 2[H2]-IBHP standard, isolation by mixed-mode cation exchange SPE and silylation prior to GC-TOF-MS analysis. A limit of detection of 33 ng/L could be achieved for a 100 ml juice sample. This method was used to quantify IBHP during the 2010 growing season at sites in both the New York Finger Lakes and the California Central Valley regions. Free IBHP increased pre-veraison until a maximum at veraison, and both free and bound IBHP decreased until harvest. In New York Cabernet franc, the concentration of IBHP increased to over 280 pg/berry and in California Merlot IBHP peaked to over 470 pg/berry. Peak concentrations of free IBHP correlated with peak concentrations of IBMP, with Merlot accumulating both the most IBMP and free IBHP. The decline of IBHP occurred at least 2 weeks after typical IBMP synthesis and degradation, though different varietals and clones have differing degradation patterns. Acid-labile IBHP in Cabernet franc degraded following veraison levels nearing 950 pg/berry, to levels statistically indistinguishable from free IBHP near harvest. The ability of several yeast strains to methylate IBHP into IBMP was examined, and it was found that the yeast strains studied did not synthesize IBMP under the fermentation conditions.