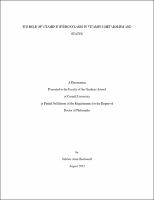 Vitamin E is a group of compounds that are considered to be the most important lipophilic antioxidants, however there is still much unknown about the biological actions of the various forms of vitamin E as well as the mechanisms that influence the concentration of vitamin E forms in tissues. Despite the common predominance of mainly [gamma]-tocopherol ([gamma]-TOH) in the diet, [alpha]-TOH is present in serum and tissues at levels 5-6 times that of [gamma]-TOH. The biological rational for this selectivity remains an enigma. The focus of this work was on the selective postabsorptive catabolism of non-[alpha]-TOH forms via the vitamin E-[omega]-oxidation pathway. Cytochrome P450 4F2 (CYP4F2) is the only known human enzyme shown to display TOH-[omega]-hydroxylase activity. In an effort to investigate the role of TOH-[omega]-hydroxylase activity in vitamin E metabolism and status, the functional murine ortholog of CYP4F2 was identified and the consequences of its deletion on vitamin E metabolism and status were determined. In vivo and in vitro studies revealed Cyp4f14 to be the major, but not the only, vitamin E-[omega]-hydroxylase in mice, and to have critical function in regulating body-wide vitamin E status. Disruption of Cyp4f14 expression resulted in hyper-accumulation of [gamma]-TOH in mice fed a soybean oil diet in which the major tocopherol was [gamma]-TOH. Supplementation of Cyp4f14-/- mice with high levels of [delta]- and [gamma]-TOH exacerbated the tissue enrichment of these forms of vitamin E. Through the use of metabolic cage studies, previously unappreciated mechanisms of vitamin E elimination were discovered, which served to counterbalance the metabolic deficit observed in Cyp4f14-/- mice. Fecal elimination of unmetabolized TOHs was determined to be a high capacity mechanism to be minimize diet induced accumulation of TOHs, especially at high dietary levels. Additionally, novel [omega]-1 and [omega]-2 vitamin E hydroxylase activities were discovered and were found to quantitatively important vitamin E elimination mechanisms. Cyp4f14-/- mice also revealed the existence of other hepatic TOH-[omega]-hydroxylase enzyme(s). Therefore genetically modified mice, in which no CYP activity was present in the liver, were utilized in order to eliminate all hepatic vitamin E metabolism. Metabolic cage studies revealed the presence of vitamin E hydroxylase activity in non-hepatic tissues. Mouse and human small intestine mucosa were found to have TOH-[omega]-hydoxylase activity, representing at least one site of extra-hepatic vitamin E metabolism. Lastly, the use of cell culture studies demonstrated that two polymorphisms in CYP4F2 functionally alter TOH-[omega]-hydroxylase activity, which may play a role in vitamin E status in humans. Overall, the current works lends new insights into the physiological role of the TOH-[omega]oxidation pathway as well as reveals novel mechanisms of vitamin E metabolism in both mice and humans, which play an important role in the regulation of vitamin E status.