Community Organizing And The Search For Strong Democracy: A Pedagogical Paradox Of Getting To Commitment 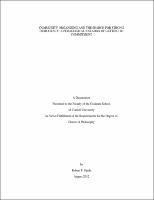 COMMUNITY ORGANIZING AND THE SEARCH FOR STRONG DEMOCRACY: A PEDAGOGICAL PARADOX OF GETTING TO COMMITMENT Robert F. Ojeda, Ph. D. Cornell University [2012] Much research has focused on the current crisis in democracy, characterized by plummeting electoral participation figures, distrust of politicians, and apathy regarding other forms of political participation. According to many scholars, such as Barber (1984), Osterman (2002), and West (2004), the solution to this crisis entails getting people engaged in public life, starting at the local level, through participation in organizations of civil society. One such organization is the IAF, which educates people to engage effectively in civic life. In this study the pedagogical approach used by one of the IAF member organizations was closely observed through an ethnographic case study approach. It was revealed that the organization's storytelling and relational organizing pedagogy effectively engaged people in a cathartic emotional learning process, which had a powerful emancipatory effect on organizational leaders. However, other institutional and pedagogical practices tended to silence leaders instead of promoting democratic participation. This paradox was interpreted considering learning in social action theories, transformative learning and theories of democracy.