Essays On The Consequences Of Demographic And Family Change: The Cases Of Teen Parenthood And Relationship Dissolution 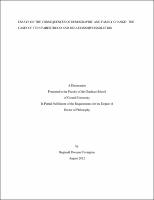