At The Mercy Of The Millers: Empire, Science, And Import Substitution In Colombia, 1930-1966 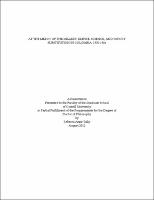 This dissertation examines processes of nation and state formation in Colombia through an analysis of the context and debates surrounding the importation, production, and consumption of wheat. Traditionally, state formation in Colombia is studied through the lens of violence or partisan conflict, and generally emphasizes the power of private industrial and agricultural interests to co-opt the state, in the process subverting democratic processes. This dissertation argues, on the other hand, that conflict can be a constructive process of state formation. It examines, for example, the debates and discourse of various actors, many of whom, as they made demands on the state, articulated visions of the state as well as the relationship between a state and the citizenry. Although they may not have succeeded in achieving their immediate aims, they did demonstrate their adherence to the Colombian state and helped strengthen it through their discourse. Similarly, nation-building in Colombia is often described as a top-down process in which state actors articulate their vision of the nation through maps or economic atlases. The role of non-state actors, particularly popular ones, is sidelined. This dissertation examines how various groups articulated their visions of the nation as they worked to defend their economic interests. Finally, it opens new avenues for understanding the economic policy known as import substitution industrialization. Where other studies focus generally on abstract macro-economic indicators in an effort to explain why these policies "failed," this dissertation presents detailed and nuanced analysis of the social and cultural aspects of import substitution in order to demonstrate that such policies had effects that extended beyond the economic sphere.