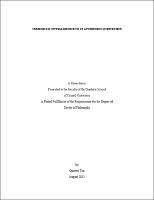 Reducing greenhouse gas (GHG) emissions is critical to mitigating climate change and achieving greater energy security. The desire to understand what governmental tools and how to apply to protect the local and global environment effectively and efficiently is a core driver for researches in the subfield of environmental economics. Despite the progress made in the modeling of social welfare with environmental externalities, many questions regarding secondbest biofuel policies, interaction between biofuel policies and finance system, and connection between trade and the environment remain unanswered. To date, the indirect, general effects of biofuel policies on the general economy, through "fiscal interaction effects" have largely been ignored. The thesis designs a general equilibrium model to investigate the fiscal interaction effects of tax credit policy. The marginal costs caused by tax credit are higher than the marginal benefits. In the second-best setting with pre-existing fuel tax and labor tax, tax credit is welfare reducing. The optimal second-best tax credit is estimated at the level of $0.22/GEEG ($0.15/gallon), which is 67% lower than the current tax exemption. Monte Carlo analysis shows that the probability of tax credit at $0.22/GEEG or less is 29% and at the current level or less is 72%. Next the thesis analyzes the effects of the quantitative ethanol mandate from both positive and welfare perspectives. Given the pre-existing government distortions, ethanol mandate is welfare enhancing. In the presence of fuel tax and labor tax, the net welfare gain caused by the ethanol mandate is estimated to be 8.61 billion dollars while the net welfare loss caused by tax credit is estimated to 26.87 billion dollars. Consistent with previous studies, the results show that the ethanol mandate dominates tax credit. Last, the thesis analyzes the effects of an ad valorem tariff on the local and global environment and total social welfare using a modified Bertrand duopoly model with environmentally differentiated products. The results show that tariff imposed by the developed country improves the local and global environment while reducing the social welfare. If the developed country has a high environmental standard, the country should restrict its imports of the dirty products. If the less developed country restricts the imports of clean products from the developed country, its social welfare and the local and global environment will get worse compared to a free trade case.