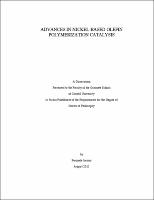 Polyolefins comprise the majority of the world's plastics consumption. Polyethylene and polypropylene are the two most widely utilized materials due to their exceptional properties and their inexpensive monomer feedstock. However, the polymers' true success derives from the heterogeneous catalysts that produce them. The discovery of these catalysts by Ziegler and Natta in the mid 20th century allowed for the linearity of polyethylene and the regio- and stereoregularity of polypropylene to be inherent in the microstructures. Additionally, the catalysts' simplicity and effectiveness are what make them the primary method for the commercial synthesis of polyolefins. The homogenous analogues of the Ziegler-Natta catalysts have given researchers the opportunity to tailor the properties of the polyolefins even further. Early group metal catalysts have been prominently studied due to their similarity to the heterogeneous systems. However, the arrival of late-transition metal catalysis for olefin polymerization delivered the ability to control microstructures in new ways as well as tolerate functionality. This work describes the investigations into the development of new nickel-mediated processes for the polymerization of olefins. Nickel (II) !-diimine catalysts have been previously developed for the regioregular "-2 enchainment of !-olefins. However, controlling the tacticity has proven to be quite difficult. Chapter two describes work toward further controlling the stereoselectivity of these catalysts to produce "-2 enchain poly(!-olefins) with high isotacticity, and in the case of 1-butene, a new class of semi-crystalline polyolefins. Ligand sterics and electronics aid in the elucidating mechanistic insight into this unique polymerization. Chapter three regards the development of an open geometry neutral nickel catalyst exhibiting high activity in ethylene polymerizations. The presence of bulky substituents on an amidinate ligand protects the axial sites of an active square-planar nickel center from associative displacement of a growing polymer chain, producing higher molecular weight polymer with greater activities than previously reported catalysts of this type. The addition of copper (II) bromide further enhances the activity of the catalyst by producing higher turnovers and achieving a much more narrow molecular weight distribution. Possible explanations for the copper's effect are discussed.