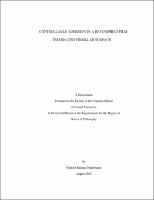 In this dissertation we present work on the development, characterization, and analysis of an easy-to-fabricate, reusable bioinspired switchable adhesive that consists of a film-terminated fibrillar layer atop a substrate. We use a dynamic rod model and stability analysis to define and analyze the buckling of a fibril subjected to a prescribed shear displacement and a constant normal compressive force. Following this analysis, we present work on the switchable adhesive: a film-terminated fibrillar interface with two metastable states. In the first state, a thin film spanning the fibrillar surface results in strongly enhanced adhesion due to crack-trapping. In the second state, the thin film collapses onto the substrate between fibrils and resembles a rough surface. We perform indentation experiments (pull-off and adhesion hysteresis), which demonstrate differences in the adhesive response of the two states. We show that the adhesive state has a pull-off load up to 70 times higher than the non-adhesive state and has up to 20 times larger adhesion hysteresis. Friction experiments show that in the collapsed state there is no static friction peak and that even in sliding friction, which is not enhanced for the adhesive state over the control samples (flat, unstructured PDMS), the collapsed state exhibits much lower sliding friction forces. We determine the pressure-to-collapse the thin film to switch from the adhesive to the non-adhesive state using hydrostatic pressure experiments. Finally, we perform both linear plate and von Kärman plate analyses on the thin film as it deforms under an applied pressure to gain insight into both bistability and the pressure required to collapse the thin film and in doing so, turn off the adhesion. We find that the von Kärman plate theory more accurately captures the pressure required to initiate collapse of the thin film onto the substrate, most likely because of the large deflections taking place during collapse. To account for pressurization that occurs in our sealed samples during hydrostatic pressure experiments, we model the rate dependence in the hydrostatic pressure experiments. Pressurization and diffusion of gas through the thin film reduces the dependence on interfibrillar spacing.