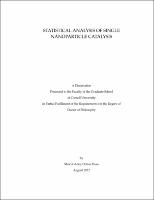 Single-molecule fluorescence spectroscopy is nowadays one of the most robust experimental techniques when one is to measure local fluctuations of individual molecules. The Chen group at Cornell University has been able to adapt this technique to detect catalytic transformations of resazurin into resorufin on the surface of a single gold nanoparticle. In this experiment, the emission intensity of a single nanoparticle is recorded as a function of time. This trajectory is intrinsically stochastic and two distinct states of different emission intensity are detected. Every state shows random dwell times that are multiexponentially distributed and their mean values depend on the substrate concentration, exhibiting saturation. In addition, memory effects are detected as dwell times are correlated. In this work we have investigated the chemical basis of the dynamical complexity and the stochastic nature of this system under saturating conditions. To this goal, we have defined constrained mean dwell times and, by studying the difference between constrained and unconstrained mean dwell times, we have found that each active site undergoes internal dynamics, fluctuating among several substates. We have also found that active sites on the surface of a nanoparticle are spatially correlated and, therefore, their fluctuations are correlated. We have also determined that fast activation processes occur through the same reaction path as slow product desorptions, and vice versa. We have obtained a further insight into the internal dynamics of each active site by studying dwell- time correlation functions. In this way, we demonstrated that every active site fluctuates among no less than three internal substates and, therefore, catalytic transformations occur through no less than three distinct reaction paths. We found that the decay rates of the autocorrelation functions are relative measures of the time scales of two distinct internal processes. For a gold nanoparticle of 6 nm diameter, the time scales of the internal fluctuations are at least one order of magnitude smaller that the time scales of the activation and product desorption processes. We also demonstrated that constrained mean dwell times, together with the dwell-time correlation functions, form a minimum set of statistical indicators that can qualitatively characterize the kinetic mechanism of the catalytic transformations on the nanoparticle surface, including fluctuations and spatial correlation among active sites.