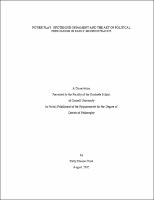 This study aimed to survey the use of grotesque ornament in France from the sixteenth to the eighteenth centuries, and assessed its meanings in both public and private spaces. After collecting a large number of examples of grotesque images and objects, three central themes were developed to guide further research. These themes were Appropriation, wherein the motif's historical resonance was important to the development of royal and noble legitimacy, and a symbol of power; Physical Exuberance, which took into account both the materiality of the design of grotesques and their reflection of political ideals, and lastly Visual Play, which considered how artists were using grotesques, as well as their flexibility in meaning. Each successive chapter explored how these themes operated in relation to specific examples. The Literature Review was developed in order to explore four aspects of the scholarly material currently available for the study of grotesques. First, it aimed to situate grotesques within the larger framework of new works in the field of ornament. It then began to consider how ancient works were received in sixteenth century France, and what they could offer readers about the uses and meanings of grotesque ornament. This involved a re-reading of Vitruvius, Horace, Qunitilian and Lucretius, in order to understand the ancient concepton of ornament (specifically grotesque ornament) for both its civic and rhetorical properties, and its reception in France. The review concluded with a synopsis of recent scholarship on grotesque imagery, largely from the field of decorative arts. The meanings of grotesque ornament were then explored in a chapter that aimed to give a general overview of grotesque ornament in France during the early modern period, and that expanded on the themes developed for this study. Further evidence was culled from contractual language in original documents from the period, and from a considertation of how the materiality of grotesque images might alter meaning. These ideas were then investigated through three central case studies. The first case study, centered on the printmaker, Juste de Juste, who worked at the First School of Fontainebleau in the 1540s, provided the first major study of his work. The chapter considered an artist's role within the context of Fontainebleau, the network of artists that disseminated ideas through it, and how artistic processes converged with new scientific endeavors, specifically anatomy. The case study posited that primtmaking was an essentially experimental practice for many of these artists, and that for Juste de Juste, a way to express his own identity. The second case study provided the first in-depth survey of grotesque ornament on the facades of houses in Toulouse, France. The city allowed for the examination of the civic character of the motif, as well as its relationship to forms developed at Fontainebleau. Grotesques were adapted to localized building traditions, and were made to display wealth and power in the cityscape. The next chapter on a series of grotesques painted by Simon Vouet for Anne of Austria in the 1640s similarly took up the exploration of power through ornamental display, but rather in the context of an interior space within the Palais Royal. The study found a variation in the historical appropriation of the motif, and exposed the role of female agency. It also expanded the discussion of siting royal authority in specific places, and how the dissemination of prints was important to establishing the imagery associated with that authority. These case studies were followed by an epilogue that discussed the continued use of grotesque ornament well into the eighteenth century, especially through the work of artists such as Watteau, and how the motif's flexibility allowed for its use in both Rococo and Neoclassical contexts. The epilogue alludes to the expansion of the marketplace, where the mass consumption of ornament was evident, and how this stimulated the global development of an exportable French style.