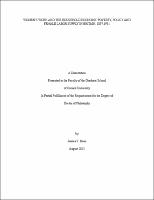 : The great increase in married women's labor force participation rates was one of the most notable trends of the twentieth century, and yet relatively little is known about how women's labor supply behavior related to the household context prior to the Second World War. My dissertation makes use of the detailed information on weekly hours of work and wages contained in the New Survey of London Life and Labour (1929-31), as well as newly-compiled data on female home workers from the 1897 and 1908 Home Industries of Women in London reports published by the Women's Industrial Council, to provide the first estimation of both the participation and the hours-of-work decisions for female workers prior to the Second World War. The most striking result is the finding that, among female workers in both major data sources, the labor supply curve was negatively sloped -- women worked longer hours at lower wages. I also find that, in many households, female workers played an important role in keeping household income above the minimum threshold, and that women from poor households were significantly more likely to be in the labor force, worked longer hours, and were more responsive to household earnings and benefit income. These results are consistent with a theoretical framework in which female household members act primarily as secondary workers who enter the labor force to make up for shortfalls in household income. They are also consistent with empirical studies of labor supply among the working poor in developing countries, in which there has long been evidence of a negative relationship between wages and hours at low wage levels. The final chapter examines the potential impact of the Trade Boards Act of 1909, which set minimum wages for female workers in select trades, on women's wage rates and income contributions to poor households. The main finding is that, among home workers in the clothing and box making trades, the Trade Boards Act would have increased the wages of the women who were affected by it enough to have been effective in reducing household poverty rates.