Reductive Dehalogenation Of Chlorinated Benzenes: A Role For Dehalobacter Spp. 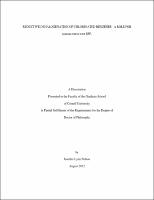