Between Colonialism And Cold War: The Indonesian War Of Independence In World Politics, 1945-1949 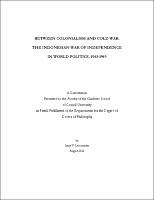 This dissertation examines the Indonesian war of independence: the process by which the archipelago formerly known as the Netherlands East Indies decolonized between 1945 and 1949. Based on extensive archival research, it investigates this revolutionary struggle through the lenses of Indonesian, Dutch, British, Australian, and American policymakers, diplomats, military leaders, and officials. The project synthesizes foreign relations and domestic political history, highlights the agency of individual leaders on all sides, and places the war in its international context. It asks why it took the Netherlands government, faced with an immediate postwar Indonesian desire for independence, four years to recognize this inalienable right. Three sets of questions guide this inquiry: the first revolves around the central actors, their motivations, and their definition of national interests; the second centers on domestic considerations, political culture, and party and electoral politics; the third focuses on the realities of the international system and rising Cold War climate. In particular, the project examines the role of Lieutenant Governor-General Hubertus van Mook, his personal ambitions, his doomed federal policy to incorporate Sukarno's ii Republic into a "United States of Indonesia" and "Netherlands-Indonesia Union," and his complicated relationship with Dutch policymakers in The Hague and British and American government officials and diplomats in London, Washington, and Jakarta. The dissertation maintains that the conflict's often-overlooked early phase was one during which a peaceful solution might still have been found. This window of opportunity was at its widest at the signing of the preliminary Linggadjati Agreement in November 1946, but closed as the Dutch moved towards the first of two largescale military offenses in the summer of 1947. In some contrast to the existing English-language literature, the study also argues that it was not American-induced financial pressures that caused Netherlands planners to capitulate in 1949, but rather the intensifying Republican guerilla warfare and the withdrawal of support by previously pro-Dutch Indonesian federalists that finally lead to a sense of moral and military defeat in the archipelago.