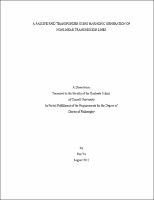 In conventional passive RFID systems, the reader (interrogator) transmits signals to serve not only as an interrogation signal, but also as a power source to the tag (transponder). The continuous-wave (CW) signal to power up the passive tags inevitably couples to the receiver input as strong self-interference. In addition, the multipath reflection from the objects in view also results in strong in-band blocker. Both interfering signals present a major challenge to the reader's receiver design. To avoid this problem, a frequency multiplier is proposed to generate a harmonic of the interrogation signal, providing a unique response signal among the leakage from the transmitter as well as the incidental backscatter from the linear objects in view. Instead of using the active frequency multiplier or diode doubler, we propose a novel frequency doubling transponder utilizing harmonic generation by integrated nonlinear transmission lines (NLTLs), where the local data signal on the transponder is modulated onto the second harmonic of the interrogating carrier. By modulating the bias voltage of the NLTLs, the transponder is capable of Amplitude Shift Keying (ASK), Phase Shift Keying (PSK) and other similar coding schemes. This dissertation discusses (1) the introduction of passive RFID tag and (2) the harmonic generation theory of nonlinear transmission lines, (3) the design of reflective nonlinear transmission lines, (4) a study of the wireless link between the reader and the tag, (5) analog modulation of NLTL based capacitive sensor tag, as well as (6) digital modulation of NLTL based passive RFID tag. As a related effort, we also iii append a similar usage of taper-section NLTL in ultra-high frequency transmitters driven by baseband signal power. Finally, we summarize the our contribution and reflect on the possible future directions. iv