Living Mulch: Its Use In Reducing Phytophthora Blight Damage To Bell Pepper, Suppressing Weeds, And The Effectiveness Of Using Two-Species Mixtures Versus Monoculture. 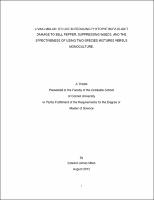 Polythene-mulched beds, used for weed control in the production of high-value horticultural crops, often have bare soil-alleyways between them, which allows soil-borne diseases to splash onto aboveground plant-parts. Living mulch species, broadcast-sown, in monoculture, in twospecies mixtures, mowed and unmowed, were grown in the alleyways between polythenemulched beds of 'Revolution' bell peppers in a Phytophthora blight-inoculated field in NY. Pepper yield and disease-incidence were not affected by the presence of living mulch compared to a bare soil control. Annual ryegrass, annual ryegrass-Dutch white clover mix (both sowed at 50% recommended seeding rate) and teff were effective in suppressing weeds. Mowing reduces living mulch height and with a suitable specie it increases living mulch groundcover and biomass; thus helping suppress weeds. Combining two living mulch species at reduced seeding rates results in >20% more efficient land-use than monoculture-cropping and provides equally effective weed control.