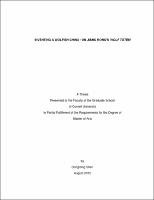 The Wolf Totem by Jiang Rong has won great success both in and out of China. Jiang Rong criticizes Han Chinese and embraces the culture of the northern ethnic minority group, the Mongols, because of its stronger sense of competition and domination. In the epilogue of this novel, Jiang argues that the wolf totem was the most ancient totem for all Chinese people and retells Chinese history using this framework. This paper explores the background of the novel and its author, as well as supporting materials the author uses in his proposal concerning the wolf totem, and suggests that the wolf totem is a purely ideological invention of Jiang Rong. This invention reflects Jiang's own philosophy and caters to the cultural needs of modern Chinese people. In inventing the wolf totem, the author uses historical documents, archeological findings, as well as a far-fetched bodily metaphor. However, none of this evidence is validated by scholarly research.