Strings To Reality: Effective Supergravity For Cosmology And Particle Phenomenology 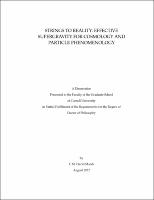 Stabilized string compactifications give rise to effective four-dimensional supergravities at energies below the compactification scale, and in this thesis, we investigate how these theories may be constrained by physical observables from particle physics and cosmology. A number of physically well-motivated scenarios such as cosmic inflation, intermediate-scale supersymmetry breaking, and a particular mechanism for baryogenesis, all rely on the form of the nonrenormalizable, Planck-mass suppressed operators in the Lagrangian, which can be computed only in a quantum theory of gravity. With this motivation, we investigate supersymmetry breaking in stabilized compactifications of type IIB string theory, and find that experimental constraints from flavor physics impose severe restrictions on certain interesting compactification scenarios. Moreover, we point out that the Affleck-Dine scenario is incompatible with some models of string inflation, e.g. brane inflation in warped throats, and we show that versions of Affleck-Dine baryogenesis with non-trivial field dynamics during observable inflation induce features in the spectrum of the cosmic microwave background radiation, which may be observable by upcoming satellite experiments, such as Planck. Furthermore, there is compelling cosmological evidence for a 'dark energy' currently dominating the energy density of the universe, but accommodating this fact by direct constructions of de Sitter string vacua has proved challenging. Here, we use random matrix theory to show that in super- gravities with many scalar fields, an exponentially small fraction of the de Sitter critical points are metastable vacua. This result significantly affects the counting of de Sitter vacua in the string landscape.