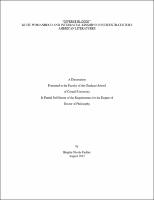 "'Diverse Bloods': White Womanhood and Interracial Kinship in Nineteenth-Century American Literatures," demonstrates how interracial kinship refigures the meanings of whiteness and womanhood in the nineteenth century. The figure of the white woman is often central to discourses of race and racism in frontier romances, abolitionist literature, and literatures of race, reunion, and Reconstruction. I argue that white women's relations to non-whites, in adoption or marriage to non-white people, or bearing children who are not understood to be white like themselves, challenges conventional rhetorics of white womanhood in the texts I discuss. Focusing on the centrality of interracial kinship relations prevents characters from being read in line with dominant ideas of white womanhood, such as Amy Kaplan's notion of white women's participation in "Manifest Domesticity" or Linda Kerber's model of "Republican Motherhood." Exposing how this raced and gendered icon is constructed by her positioning against white and non-white kin, literary narratives of white women's interracial kinship relations work to shape discourses of domesticity, heterosexuality, nationalism, abolitionism, and racial uplift. Ultimately, "Diverse Bloods" shows how nineteenth-century texts shifted the expectations of white women's kinship towards a model of womanhood able to incorporate structures of national multiracial family.