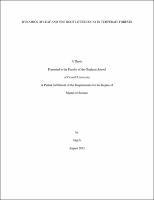 Leaf and fine root litter decomposition is central to biogeochemical cycles in northern forest. I studied the nitrogen translocation to leaf litter during decomposition, and the fine root decomposition process. Nitrogen immobilization in fresh litter represents a significant N flux in forest ecosystems, yet its sources, controls, and implications are not well studied. I conducted two leaf decay experiments, using 15N-labeled sugar maple leaf litter, to quantify N transport from old litter and soil to fresh litter during early stages of decomposition, and I examined the influence of litter N concentration and soil N availability on upward N transfer in a northern hardwood forest. After one year of decay, the average N transfer from soil to fresh litter (2.63 mg N g-1 litter) was much higher than the N transfer from older litter (1 to 2 yr old) to fresh litter (0.37 mg N g-1 litter). As an indicator of N transfer efficiency from these N sources into decaying litter, we calculated the ratio of annual N transfer / excess 15N pool for these two N sources. The ratio was not significantly different between old litter and soil, suggesting that fungi utilize N in the old litter and mineral soil pools for transport to decaying fresh litter with similar effectiveness. Litter N concentration had a significant effect on upward N flux into decaying leaf litter, whereas no effect of soil N fertilization was observed. These results illustrate the mechanisms whereby continuing N deposition will affect the important process of N translocation into decaying litter. Future work characterizing the fungal taxa involved in this process and their responses to changing environments is needed. fine root decomposition. Another of my studies is on Despite its importance in global biogeochemical cycling, fine root decomposition has received limited attention, and factors that regulate this process are not well understood. Most studies on fine root decomposition have been based on litterbag experiments, but the appropriateness of this approach has been questioned. In this study, I compared fine root decay using litterbag and intact core approaches, and I evaluated the role of fungal hyphal networks, root chemistry, and soil environment in regulating root decay rates and decomposer communities. I used 454 pyrosequencing to survey and compare the fungal communities on decaying fine roots from different samples. The results show that 1) fine roots decaying in intact cores have a significantly higher rate of mass loss and N, P release than fine roots decaying in litterbags; 2) there is an obvious difference between fungal communities developed on intact core root samples and those on litterbag root samples; 3) by rotating intact cores and disrupting the formation of fungal hyphal networks, fungal decomposer communities on fine roots were altered, yet the decay rates of fine roots did not change and; 4) root chemistry, rather than soil environment, has a significant effect on fine root decomposition rate. NCBI BLAST search of the most abundant fungal operational taxonomic units in this study found ectomycorrhizal fungi orders such as Boletales, Thelephorales, and Cantharellales on roots after half year and one year of decay, suggesting that ectomycorrhizal fungi may become saprotrophic after root senescence. Further phylogenetic analysis is needed to identify the important fungal species that are involved in fine root decomposition, which will shed further light on the controls of the fine root decay process.