A Conversation with James W. Spencer
JavaScript is disabled for your browser. Some features of this site may not work without it.

A Conversation with James W. Spencer 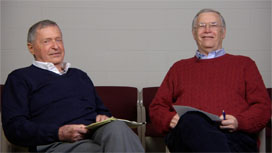 The legacy of Professor Emeritus James W. Spencer is traced from his days as a Cornell undergraduate in civil engineering. In 1951 Jim began his work as a faculty member in agricultural engineering at Cornell on farm-to-market roads in New York State. Then he progressed through administrative assignments in Cornell Cooperative Extension, the College of Agriculture and Life Sciences and at the university level as Vice Provost with a focus on financial matters. After retirement he guided a national philanthropic program in U.S. higher education for the Atlantic Philanthropies. Jim Spencer's career was distinguished by his quiet and responsible attention to academic management with consistent follow-through and a talent for working across the traditional academic boundaries. His sustained collaboration with (Dean and then Provost) W. Keith Kennedy is legendary. Spencer's reflections were recorded twenty-five years after his 'retirement' at Cornell.

Contents: In addition to a streaming video format, several computer and mobile device formats are provided for download. Spencer's public involvement at Cornell between 1968 and 1989 is illuminated by numerous news articles extracted from the Cornell Chronicle.