The Newsletter of the Department of Chemistry and Chemical Biology at Cornell University Number 21, August 1977 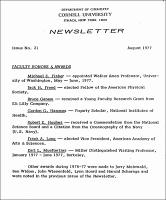