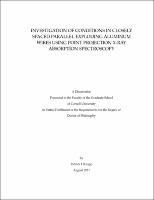 This dissertation presents the results of experiments using point-projection absorption spectroscopy to measure conditions with 20[MICRO SIGN]m spatial and sub-ns temporal resolution in closely spaced parallel and single exploding Al wires. Experiments were conducted on both the 0.5 M A XP and 1 M A COBRA generators at Cornell University. The intense continuum radiation pulse from micron scale Mo wire X-pinches was used to backlight the exploding wire plasmas. A spherically bent quartz crystal spectrometer was used to disperse the x-rays which, in conjunction with the small source size, provides very high spectral resolution ([lamda]/[INCREMENT][lamda] ~ 5000) and is ideal for studying the detailed 1 s [-] 2 p and 1 s [-] 3 p absorption spectra in the plasmas generated by Al wire array z-pinches. Absorption features of ionization stages from Mg-like to He-like Al have been identified in spectral structures surrounding the cold K-edge at 7.95Å (1560eV ). This work represents the first time many of the 1 s [-] 3 p features have been observed and identified. Changes in the spectral structure near the K-edge are correlated with the spatial structure of the dense residual wire core. The transition from cold dense core material to the tenuous coronal plasma is observed directly via the spatially resolved change in absorption near the wire core. In the COBRA experiments a step wedge was used to calibrate the expo- sure level on the film, which enabled us to determine the absolute transmission through the plasma within ±17%. A genetic algorithm was developed to fit synthetic spectra calculated using the collisional-radiative code SCRAM to the experimental spectra. This approach allowed the inferred plasma conditions to vary along the line of sight of the diagnostic. The distributions of density and temperature determined by the genetic algorithm are not unique, but were constrained to satisfy several criteria that ensure they are physically reasonable. In the two-wire experiments the temperature reaches 29 ± 7eV in the plasma accumulating at the center line between the two wires. At the edge of the wire cores, where the density remains high ( 0.027g/cc), the temperature is less than 10eV .