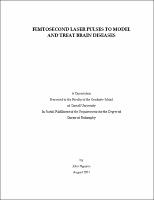 Tightly focusing femtosecond laser pulses into bulk media, such as brain tissue, can generate high intensities within the focal volume. With sufficient laser energies, nonlinear absorption of femtosecond laser pulses by the media can take place. This thesis takes advantages of these nonlinear processes to image the cortical vasculature in live anesthetized rodent, and induce localized tissue disruption. We used two-photon excited fluorescence (2PEF) microscopy to image fluorescently labeled cortical vasculature in vivo. In this technique, two-photons are simultaneously absorbed to generate fluorescence that is localized within the focal volume, where intensity is greatest. Scanning the focus enables three-dimensional imaging since out-of-focus fluorescence is not generated. Higher-order nonlinear absorption processes that lead to plasma and cavitation bubble formation are used to induce localized tissue disruption. Together these nonlinear tools enable fine-detailed studies of the cortical vasculature and precise ablation of tissue. To understand the potential role of small venule strokes in the development of cognitive disorders, we investigated the blood flow and vascular effects in individual vessels after inducing single venule occlusions using femtosecond laser ablation. To better understand the blood flow and metabolic responses during an epileptic seizure, we use a several optical techniques to investigate the neurovascular and neurometabolic activity during pre-ictal and ictal phases of focal seizures. Using 2PEF microscopy we reveal the presence of vasoconstriction in arterioles surrounding the focus prior to seizure onset. The deposition of energy within the focal volume can also used to make incisions in bulk brain to disrupt tissue. Using our laser scalpel, we produced sub-surface cortical incisions and characterized the cut width and depth as a function of different laser energies. We then employed this cutting technique to determine the efficacy of sub-surface cuts in stopping seizure propagation. We then showcased a technique to produce welds at the unexposed interface between two pieces of glass and characterized their size as a function of multiple experimental parameters. Joint strength of the fused glass was tested in addition to investigating the changes in optical properties induced by the weld. Lastly, future experiments and advantages of nonlinear optical techniques are discussed.