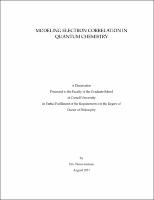 Accurately predicting the effects of correlations caused by strong interactions between electrons represents one of the key unsolved challenges in quantum chemistry. This thesis details theoretical developments addressing two aspects of this challenge. First, advances in Canonical Transformation (CT) theory address the task of describing weak interactions between the chemically active valence electrons and the chemically inert core electrons when the valence electrons are strongly correlated. Second, new methodologies for Jastrow factor wavefunctions are explored in an attempt to describe strong interactions amongst the valence electrons. In its original form, CT theory suffered from poorly understood numerical instabilities in strongly interacting systems and poor accuracy relative to coupled cluster theory in weakly interacting systems. Here the numeric issues are identified as consequences of CT theory's central approximation and shown to be similar to the intruder states of many-body perturbation theory. It is demonstrated that these instabilities can be avoided by placing particular restrictions on the theory's degrees of freedom. In weakly interacting systems, we show that using a quadratic, rather than linear, commutator approximation improves accuracy, and that the accuracy in any system can be improved by making use of the system's 3-body reduced density matrix. These improvements are demonstrated in a variety of systems, including N2 , H2 O, NiO, and free base porphin. Jastrow factor wavefunctions have traditionally been handled using quan- tum Monte Carlo techniques such as variational Monte Carlo (VMC). Here we explore how VMC can be made to accommodate the unconventionally large numbers of variational parameters present in many-body Jastrow factors and show that the stochastic reconfiguration algorithm can be thus improved by employing the method of conjugate gradients to solve its central linear equation. In addition to extending the reach of VMC, we have also developed nonstochastic methods for working with Jastrow factor wavefunctions that do not rely on random sampling. These methods, similar in design to those used with the coupled cluster wavefunction, produce energies very close to those of VMC in applications to the Heisenberg, spinless Hubbard, and full Hubbard model Hamiltonians.