The 'Bestli' Outlaw: Wilderness And Exile In Old And Middle English Literature 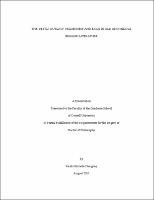 This dissertation, The 'Bestli' Outlaw: Wilderness and Exile in Old and Middle English Literature explores the reasons for the survival of the beast-like outlaw, a transgressive figure who highlights tensions in normative definitions of human and natural, which came to represent both the fears and the desires of a people in a state of constant negotiation with the land they inhabited. Although the outlaw's shelter in the wilderness changed dramatically from the dense and menacing forests of Anglo-Saxon England to the bright, known, and mapped greenwood of the late outlaw romances and ballads, the outlaw remained strongly animalistic, other, and liminal, in strong contrast to premodern notions of what it meant to be human and civilized. I argue that outlaw narratives become particularly popular and poignant at moments of national political and ecological crisis-as they did during the Viking attacks of the Anglo-Saxon period, the epoch of intense natural change following the Norman Conquest, and the beginning of the market revolution at the end of the Middle Ages. Figures like the Anglo-Saxon resistance fighter Hereward, the exiled Marcher lord Fulk Fitz Waryn, and the brutal yet courtly Gamelyn and Robin Hood, represent a lost England imagined as pristine and forested. At the same time, their brutality points to a deep literary ambivalence towards the wilderness and the animal.