'No Achievement But Through Arabic': The Ibero-Almohad Education Of Samuel Ibn Tibbon 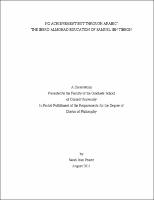 The present study is an intellectual biography of Samuel ibn Tibbon (c.1150-1232), the scion of an important family of Andalusi translators exiled to Provençe in the wake of the ascent to power of the Berber Almohad dynasty in Iberia in the late twelfth century. It comprises three areas of investigation: examinations of Samuel's education as a translator at the hands of his father and of the philosopher and theologian Moses Maimonides; of his own writings that describe his thoughts about his profession; and of the ways in which he was memorialized by later writers after his death. By examining a variety of Hebrew and Arabic sources related to each of these three aspects of the record of Samuel's intellectual and professional life, it is possible to observe many ways in which Samuel's work transformed the status of the Hebrew and Arabic languages among Andalusi and Andalusi-exiled readers whose lives were shaped by the changing intellectual and political scene wrought by the Almohads.