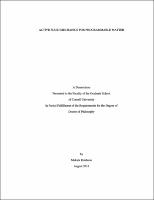 In this research I have explored the use of fluid mechanics to create programmable matter. Programmable, reconfigurable systems are those whose properties can be reconfigured on-the-fly, either on-command to enhance autonomously in response to internal/external stimuli. functionality, or I have investigated two approaches to creating such programmable systems. In the first approach, I have used microfluidics to carry out directed fluidic assembly of microscale tiles to create programmable and reconfigurable target structures, while in the second approach, I have examined the use of optofluidics to reconfigure flow pathways and build morphable channel structures on a microfluidic device, thus creating programmable microfluidic systems.