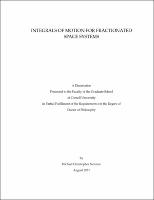 As space system architectures begin to rely upon cooperation between multiple spacecraft to perform a single task, the analysis and control of the relative motion of the individual vehicles becomes a critical component of a successful mission. The approach of a typical constellation of spacecraft is to establish initial orbital conditions such that the natural motion of the individual component spacecraft of the larger system provide the desired Earth coverage, relative separation, or other performance parameters at specified times. When a correction needs to be made, a specific spacecraft can be commanded to perform the required maneuver to reestablish the desired conditions. While this approach is viable for satellite constellations where each component is designed to function independently over large separation distances, future concepts of space systems focus instead on the cooperative interaction of fractionated architectures, where each component spacecraft provides a necessary function to the overall system and cannot necessarily be moved independently. The inclusion of non-contacting force and torque interactions between the component spacecraft potentially addresses the perceived need of these fractionated space systems to act in a collaborative fashion. By establishing an internal and controllable force dependent upon the relative dynamical states between spacecraft, traditional feedback control approaches provide stabilizing actuator inputs to either maintain or change the relative geometry of the system. Augmenting the dynamics of the individual spacecraft with these forces, however, effectively introduces a perturbation to their otherwise easily predictable orbital motion about the central body. This dissertation explores the unique dynamics encountered in these fractionated space system architectures utilizing non-contacting interactions between components. As these non-contacting interactions represent forces and torques internal to the overall system, certain integrals of motion exist that can provide insight to the system dynamics. The relative motion of a model twospacecraft system dynamically coupled by magnetic flux pinning is analyzed through the development of the equations of motion under a simplifying assumption related to center of mass motion and the implementation of a feedback control law stabilizing the system about identified equilibrium separations. An examination of the integrals of motion under this class of simplifying assumption reveals a violation of their ideally time-independent property that can be related to the induced error in the dynamical state of the fractionated space system. This provides a means to evaluate the validity of these center of mass motion assumptions. A hybrid systems framework for designing recurring non-contacting interactions to accomplish an arbitrary change in orbital elements for these fractionated space systems is developed as well. Finally, applications of identified integrals of motion of space systems to parameter estimation problems are introduced and used to extract the inertia and actuator alignment parameters of a spacecraft with momentum actuators.