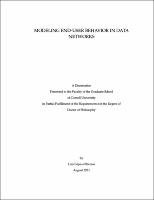 A session is a cluster of packets that represents end-user activity in data networks, e.g. surfing the web, transferring files, streaming media, Internet-calling. We study three problems of sessions. The first problem examines why for real sessions the distribution of the number of bytes or number of packets per unit time traveling through a network node is approximately Gaussian, despite previous theoretical results say it may also be stable L´ vy. The second and third problems study four key session e features: size or number of bytes transmitted, duration, average transfer rate, and initiation time. We focus on marginal distributions of size, duration and rate, dependence structure between the marginals, and distribution of the difference between consecutive initiation times. We group sessions according to peak transfer rate in the second problem, and network application in the third problem. The ultimate goal is to teach computers how to mimic network sessions and understand network end-user behavior.