Essays On The Estimation Of Prices In Implicit Markets 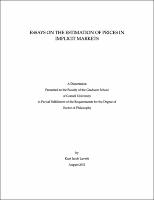 Chapter one examines workers' labor supply decisions to estimate both the equilibrium compensating differential for fatal risk and marginal willingness to accept fatal risk. Using new panel data from commercial fishing deckhands in the Alaskan Bering Sea between 2003-2009, I exploit variation within the worker-firm level in hourly earnings across fishing seasons and exogenous variation in weatherdependent seasonal fatality rates to identify the compensating differential for occupational fatality risk. This identification approach avoids many of the common sources of bias in the estimation of compensating differentials, including endogenous job switching and unobserved worker and firm heterogeneity. Additionally, changes in earnings caused by exogenous changes in risk within the worker-firm level identify information about individual preferences for risk that is not conveyed by the equilibrium wage-risk envelope. A structural labor supply model incorporates dynamic job-specific skill accumulation, which affects subsequent earnings. The compensating differential, normalized to a value of statistical life, is estimated to be $6.17 million using a reduced-form model and $6.75 million using a structural model. Estimates from both models suggest that wages increase as a concave function of the level of risk. The findings imply that aversion to marginal increases in fatal risk falls as the level of risk rises, and that the marginal VSL is a decreasing function of the level of risk. The second chapter uses unique data from a survey of physicians in 5 states to provide the first comprehensive analysis of the effects of non-compete agreements on labor markets. We estimate factors associated with the use of non-competes, the compensating wage differential for accepting a non-compete clause, and discuss the effects that non-compete clauses have on mobility and the geographic distribution of primary care physicians. We find that non-competes are used frequently among primary care physicians, and that they impose binding constraints on labor market behavior and are associated with significant compensating wage premiums of about 11% of wages. The analysis suggests that state-level public policies play an important role, as we find that states with very strict enforceability of non-compete agreements have fewer physicians per capita and higher prices for physician services.