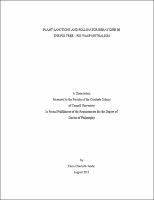 Theory predicts that mutualisms should be vulnerable to invasion by cheaters, yet mutualistic interactions are both ancient and diverse. When cooperation is costly, what prevents one partner from reaping the benefits of the interaction without paying the costs? In Chapter One, we examined factors affecting mutualism stability in six fig tree - fig wasp species pairs. We experimentally compared the fitness of wasps that did or did not perform their most basic mutualistic service, pollination. We found host sanctions that reduced the fitness of non-pollinating wasps in all derived, actively pollinated fig species (where wasps expend time and energy pollinating), but not in the basal, passively pollinated fig species (where wasps do not). We further screened natural populations of pollinators for wasp individuals that did not carry pollen. Pollen-free wasps occurred only in actively pollinating wasp species, and their prevalence was negatively correlated with the sanction strength of their host species. Our findings suggest that sanctions are critical for long term mutualism stability when providing benefits to a host is costly. In Chapter Two, we examined the precision of host sanctions. If multiple symbionts interact with each host or host module, sanctions may not be precise enough to effectively punish cheating symbionts individually. Such lack of precision could greatly reduce the effectiveness of sanctions. Combining field experiments and molecular methods, we show that offspring reducing sanctions in Ficus nymphaefolia act on the fig level, not on the level of individual flowers within a fig. Such imprecise modular sanctions allow pollen-free wasps to free-ride in figs with multiple foundresses. In Chapter Three, I use mathematical models parameterized with empirical data to examine what mechanisms are most likely to maintain the behavioural polymorphism in fig wasps. Is being a pollen-free wasp adaptive, or is this morph maladaptive but repeatedly introduced through mutations? The large differences across fig species in the strength and likelihood of sanctions lead to different mechanisms being likely for maintaining the wasp polymorphisms in these closely related wasp species.