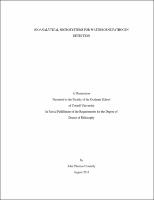 Waterborne pathogens are a global health concern, with 1 billion people having no access to uncontaminated water sources and 2.2 million annual deaths resulting from infection. Biosensors offer the possibility of rapid, sensitive and specific detection of pathogens and, thus, the ability to provide warning systems prior to consumption and a means to monitor the efficacy of disinfection systems. However, in order for biosensors to be useful, one must be able to attain clinically relevant detection limits in real environmental samples and do so on a reasonable timescale. Thus, methods to increase the analytical sensitivity via pre-concentration and microfluidic device design are described herein. Firstly, employing a series of pre-concentration and purification steps followed by an enzymatic amplification of an mRNA sequence, it is shown that a limit of detection of one Cryptosporidium parvum oocyst can be attained and that this assay does work in real water samples. Secondly, integrating a liposome-based immunoassay and a nanoporous membrane for electrokinetic pre-concentration into a single microfluidic device for the detection of a human norovirus surrogate yielded an order-of-magnitude decrease in the limit of detection when compared to an optimized device foregoing pre-concentration. Finally, the optimization of microfluidic channel dimensions for assays using liposomal signal amplification is described; illustrating that a 60% reduction in channel height produces an order-of-magnitude reduction in the limit of detection. Taken together, the described work provides tools to advance the field of biosensors by demonstrating means to improve analytical sensitivity and overcome the obstacles presented by environmental water samples.