The Cost Of The American Dream: Low-Income Homeownership And Metropolitan Housing Opportunity, 1990-2000 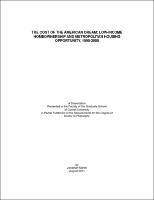 Through the 1990s barriers to low-income homeownership decreased sharply, and by the early 2000s low-income mortgage borrowers enjoyed unprecedented access to expanded home financing options, lower downpayment requirements, increased governmental subsidy, and the lowest interest rates in decades. This happened not by accident but through determination: beginning in the early 1970s, federal housing policy makers began promoting the idea of increasing housing demand through expanded low-income household market participation as a strategy to solve the country's affordable housing crisis. Indeed, homeownership increased more rapidly amongst this group through the 1990s than for any other segment of the population. This research examines housing opportunity outcomes for low-income black households by tenure (owning versus renting) in five large U.S. metropolitan areas- Chicago, Detroit, New York, Philadelphia and Washington DC- between 1990 and 2000 through analysis of U.S. Census Bureau Public Use Microdata Survey (PUMS) data. Housing opportunity is defined as a low-income household's ability to find a home that is 1) proportionately affordable to its income, 2) located in an area that provides access to higher quality public education, and 3) located in close proximity to employment. These housing characteristics encapsulate the most potent wealth creation benefits that policy makers maintain are inherent to homeownership. The research findings indicate that a greater proportion of low-income black renter households as compared to homeowner households paid a smaller proportion of their income for housing, commuted shorter distances to work, and had greater access to higher quality schools in 2000 in three of the five metropolitan areas studied (Chicago, Detroit and New York). Homeownership provided only slightly greater housing opportunity than renting in the other two metropolitan areas examined (Philadelphia and Washington DC). While outcomes varied by metropolitan area, between 1990 and 2000, low-income black renters experienced greater increases or smaller decreases in housing opportunity than did low-income black owners in four of the five metropolitan areas examined (Chicago, Detroit, New York and Philadelphia). The research findings support a main study conclusion that under the present market structure low-income homeownership does not necessarily result in greater housing opportunity for low-income buyers as compared to renters, and that renting is often a better tenure choice for many low-income households in these metropolitan housing markets. The study findings also suggests that federal subsides supporting low-income homeownership should be reconsidered based on careful analysis of existing market conditions in the metropolitan area of purchase. The study concludes by making several federal housing policy recommendations, including expanding direct funding and support for the development of low-income rental property, and extending personal tax deductions to low-income renters to make renting a more financially attractive option for low-income households.