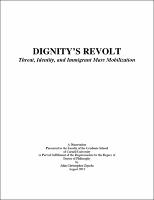 This dissertation analyzes the unprecedented, nationwide immigrant rights protest wave of 2006 and its effects on the national electorate and policymaking process. Specifically, the study focuses on three research questions: 1) What explains the surprising rise and abrupt decline of the demonstrations across the country?; 2) How were the marches organized, and what explains variation in the levels of mobilization in both expected and unexpected locations?; and 3) What, if any, effects did the wave of protests produce? To answer these questions, I use various data sources (e.g., more than 120 in-depth interviews, participant observation, newspaper archives, public opinion research, Census data, and data from the Department of Homeland Security) and perform multiple case studies. My findings indicate that a legislative threat to undocumented immigrants, and those who assisted them, helped create the opportunity for immigrant mass mobilization. This threat - along with the subsequent xenophobic rhetoric and discrimination against both immigrants and U.S.-born people of color from immigrant descent - helped create a collective identity and motivation to take action among supporters of immigrant rights. My results show that, through the utilization of local community resources and networks, immigrants formed broad coalitions to organize the demonstrations and diffused their calls for protest through ethnic media outlets. I find that levels of mobilization varied by the degree to which different immigrant ethnic groups felt threatened. Once the legislative attack had subsided, the movement shifted its focus to more institutional forms of politics. For the policymaking process, the immediate effects of the protest wave were that it helped prevent an anti-immigrant bill from passing in the Senate, while at the same time hurt activists' attempts to win legalization for undocumented immigrants. In terms of their indirect and long-term impacts, the demonstrations helped provide the momentum and laid the foundation for an unprecedented national campaign to naturalize, register, and mobilize millions of immigrants to vote, an impact that influenced the outcome of the historic presidential election of 2008.