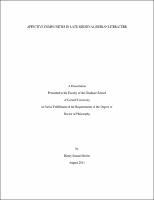 My dissertation offers a new account of the explosion of sentimental literature in fifteenth-century Iberia and, at the same time, suggests a new way of reading that literature. Through the concept of the affective community, which suggests that political, religious, and literary communities (genres) are held together and shaped not so much by shared emotion as by a shared ethical attitude toward emotion, I analyze exemplary works of the principal genres involved in this explosion: cancionero poetry and sentimental fiction. Other important genres such as the chronicle and chivalric fiction also play key roles in my analysis, and my approach throughout is comparative, dealing substantially with works not only from Castile, but also from the kingdoms of Portugal and Aragon. The most important texts in the dissertation are Pedro de Corral's Crónica sarracina (ca. 1430); Pedro, Constable of Portugal's Sátira de felice e infelice vida (ca. 1450); and the poetry of Ausiàs March (ca. 1397-1459). However, I also discuss moral, theological, and political treatises by crucial figures such as Alonso de Cartagena (1384-1456); Alfonso de Madrigal, el Tostado (1410-1455); Rodrigo Sánchez de Arévalo (ca. 1404-1470); Diego de Valera (1412-1488); Duarte I of Portugal (1391-1438); and the Infante Pedro, Duke of Coimbra (1392-1449). Through my discussion of these treatises, I show how the emotional asceticism of Stoic and early-Christian thought was increasingly held to be inadequate for the period's political challenges, giving way before a politics that emphasized psychological unity beyond the strict limits of reason. It is in the more traditionally literary works, however, that these evolving political postures found their furthest-reaching development. I show that Corral, the Constable, and March each develops a novel affective rhetoric that reenvisions or rejects their communities' preexisting affective paradigms, laying bare how mourning and compassion can form the basis for new communitarian possibilities. I argue, finally, that this rhetorical modeling of a communitarian politics of mourning and compassion - and the forms of subjectivity it articulates - is relevant to ongoing contemporary debates surrounding affect and community that seek new formulations of these concepts after the so-called death of the subject.