Hearth & Soul: Parties, Social Policies, & Ideologies Of The Family In The 20Th Century 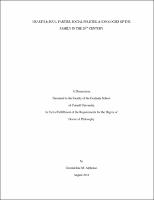 Although the 'culture wars' of the 1990s may be long passed, contemporary American politics continues to be infused with struggles to define the soul of America; issues of morality, culture, and family rising to the fore of national attention alongside ongoing concern over the economy. This dissertation documents and analyzes the contemporary phenomenon of the rightward turn in American politics in the last three decades towards the revival of traditional family ideals, despite the ongoing dramatic liberalization of gender, family and social relations on the ground. It demonstrates that traditional family revivalism in social policies is part of an enduring dynamic in American politics in which one set of traditional (Soul) family ideals, emphasizing a family's character, morality and spiritual attitude, have long rivaled a more materialist (Hearth) set, focused on families' material conditions. The current salience of the traditional, Soul family ideal within public policy is one such phase in the ongoing competition between the two family ideals. An old song but sung with new lyrics, it now represents the current, ongoing, Southernization of American Politics: a configuration of party realignment, shifting constituencies, the rising salience of the South and its unique cultural concerns, combined with the Republican's Party's accommodation of (southern) social conservative values within its more long-standing economic conservatism. This complex empirical story is told in the context of two previous periods in American history: the Progressive era (1900-1920) and the postwar period (1945-1956), in which similar contestations over family ideals engendered different policy outcomes, depending on the political and social factors of the time. The case studies of the three periods (Progressive, postwar and contemporary) reveal both the continuities in, and the evolution of, the competition over family policy ideals, suggesting that while the story of Hearth and Soul is an old one, it is now being played out in new ways. Regional electoral conditions now institutionalize this ideational battle in ways which embed it even more deeply in American politics than ever before, elevating family from its previously minor place on the national agenda to now being a major center of partisan contestation and policy conflict.