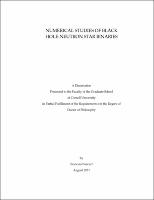 Black hole-neutron star mergers are extremely energetic events with the potential to generate gravitational waves detectable by ground-based detectors. They can also form massive, hot accretion discs around a remnant black hole, which could power short gamma-ray bursts. Due to the strength of the gravitational interactions around the time of merger, black hole-neutron star binaries can only be studied in a general relativistic framework -- and as we lack analytical solutions to Einstein's equations of general relativity in the case of binary systems, numerical simulations are required to determine their evolution. In this thesis, we study black hole-neutron star binaries using the SpEC code. We show how to efficiently and accurately determine the initial conditions for numerical simulations, and study the influence on the dynamics of black hole-neutron star mergers of both the equation of state of nuclear matter - which is unknown but could be constrained through observations of compact binaries - and the spin of the black hole. We find that the dynamics of mergers is strongly affected by the radius of the star: small stars are harder to disrupt, form lower-mass discs and emit waves longer (and at higher frequency) than large stars. The component of the black hole spin aligned with the orbital angular momentum of the binary also modifies the disk formation process: high spins let the star approach closer to the black hole without plunging into it, subjecting it to stronger tidal forces and making it easier for the star to disrupt and form a massive disk.