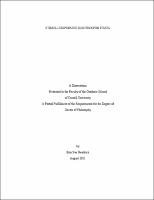 Stimuli-responsive fibers were created by incorporating pH-sensitive nanoparticles into electrospun cellulose acetate (CA) and poly(lactic acid) (PLA) fibers. The fluorescent silica nanoparticles, Cornell dots (C dots), have both a fluorescent core (518 nm emission), and a fluorescent pH-sensitive shell (572 nm emission). Using confocal microscopy, the signaling effectiveness of these fibers was studied by varying several parameters: fiber diameter, substrate, and surface hydrophilicity. For the CA fibers, fiber diameter was varied by changing the feed rate during the electrospinning process to 0.03 mL/hr, 0.30 mL/hr and 0.30 mL/min, producing fibers with average diameters of 1.1 [MICRO SIGN]m, 1.8 [MICRO SIGN]m and 9.5 [MICRO SIGN]m, respectively. It was found that fibers with larger surface area had a greater sensitivity to pH change than fibers with smaller surface area. The response of the pH-sensitive fibers also varied when both the nanoparticles and CA fibers were applied/electrospun onto the surface of four different substrates: optical glass slides, cotton, cotton/polyester, and nylon/spandex fabrics. Fibers spun onto glass slides and cotton/polyester showed an improvement in sensitivity to pH change, while the cotton and nylon/spandex samples were greatly influenced by the chemistry inherent to these substrates. Poly(lactic acid) - b - poly(ethylene glycol) (PLA-b-PEG) copolymers with block lengths of 1000-750, 5000-1000 and 1000-5000 and bulk PEG were added to PLA electrospinning dopes to create hydrophilic but non-water soluble nanofibers. PLA-b-PEG block lengths strongly affected the total amount of PEG that could be incorporated, spinnability and fiber morphology. Solutions containing >1% w/w of the lowest molecular weight copolymer PLA (1000) - b - PEG (750) formed an unspinnable, cloudy gel. Addition of the PLA (5000) - b - PEG (1000) to the base spinning solution influenced fiber diameters and spinnability in the same manner as simply increasing PLA concentration in the spinning dope. Addition of PLA (1000) - b - PEG (5000) resulted in decreased fiber diameters, and allowed for the highest overall copolymer loading. In final fiber formulations, maximums of 0.9, 2.9 and 9.3 wt% PEG could be added to the fibers using the PLA-b-PEG 1000-750, 5000-1000 and 1000-5000 respectively. PEG (MW = 3350 g/mol) homopolymer was added to the spinning dopes to result in 1.0 and 5.0 wt% PEG in the final fibers. These spinning dopes were electrospun with more non-uniform and variable morphology and diameter size than occurred with the addition of PEG in block copolymer form. Water absorbance by electrospun nonwoven fabrics increased by four times over the control PLA with the addition of 1.0 wt% PEG, and by eighteen times with the addition of 9.3 wt% PEG with the block copolymers. At similar overall PEG loadings, the addition of PLA-b-PEG resulted in a two to four fold increase in water wicking over the addition of PEG homopolymer. The improvement in water wicking was mirrored in the pH-measurement data compiled for these samples on glass slides. It was found that response to pH change was influenced by PEG content, copolymer chain length, fiber geometry and water wicking. Finally, incorporating CA and PLA/PLA-b-PEG fibers into a prototype fluidic chip created a pH-sensing device. The response of the fibers was consistent with the increases in surface area and wicking rate, just as in the glass slides experiments, and proved to be a functional method for measuring pH change.