Methyl Elimination Channel Of The Photodissociation Of Allyl Radical: Semi-Classical Simulation And Velocity-Map-Imaging 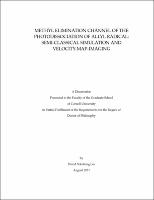 Allyl radical is one of the most important stable radicals in the study of hydrocarbon combustion chemistry. Most of the competing dissociation channels for allyl radicals excited with a specific internal energy yield atomic or molecular hydrogen. Little was known about the methyl elimination channel, except its contribution of ~ 10% to the total yield, until recent time-of-flight study ( J. Chem. Phys. 128, 151101, 2008 ) revealed unusual product energy distribution which violated the RRKM prediction. In this thesis methyl products with specific internal energy were experimentally investigated by velocity-map-imaging of photolytically generated allyl with rotational temperature below 20 K. An anisotropic angular distribution of the the methyl product was observed from dissociation of this cold allyl radicals, in contrast to previous studies starting with pyrolytically generated allyl radicals. The source of the unusual methyl product energy distribution was investigated by classical trajectory simulation on an ab-initio potential energy surface of the ground electronic state of allyl. This theoretical study revealed a new high energy transition state with vinylidene, H2 C=C, as the intermediate that accounts for the observed energy distribution.